Get fresh music recommendations delivered to your inbox every Friday.
We've updated our Terms of Use. You can review the changes here.

by Left Hand Cuts off the Right & Tasos Stamou 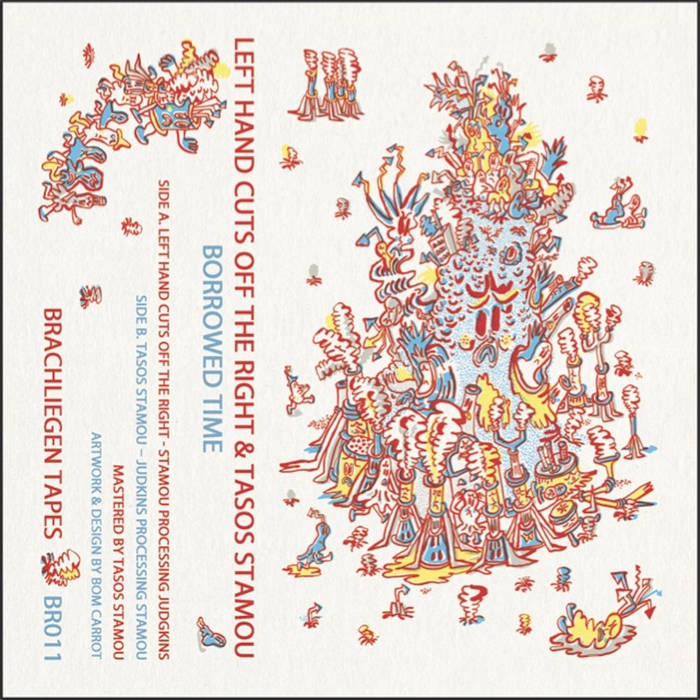 BORROWED TIME is a cross collaboration from LEFT HAND CUTS OFF THE RIGHT (Robbie Judkins) and TASOS STAMOU, working with zither, piano, objects, circuit bent devices, effects, loops and field recordings. The project sees two recordings of solo live performances — by LHCOTR at Cafe Oto and STAMOU at Hundred Years gallery — exchanged between the artists, who reinterpret and process the original live sets through digital and acoustic manipulation. Present at each others’ performances, BORROWED TIME is an active collaboration of mutual deep listening and exchange, through which the boundaries between artist and listener are stretched and bent to produce a work of phantasmic communality.

The artists discuss their approach via email exchange as follows:

TASOS: “I extracted 2 MIDI tracks out of the recording, one followed the tones and the other the harmonics, then I applied different synths responding to the information, for instance the vibraphone keys are actually following the harmonic extracts of your actual sound....I only did some live filtering and arranging, but all following the original timeline….”

ROBBIE: “So it's your piece being played out through a guitar amp, tiny 5w Marshall amp, monitors and headphones. The tiny Marshal amp is mic'd and recorded onto the Tascam 4-track tape recorder along with a contact mic attached to the chair I was sat on, microphone on the piano I played alongside the zither which was recorded through a Zoom R8 and I also used the onboard mics to record the room. I also played with the speed and pitch control of the Tascam tape player when playing back and recording followed by some mixing. Enjoy?!”

LEFT HAND CUTS OFF THE RIGHT'S ‘1-7-21 (live)’ is a live improvised reversioning of material from the forthcoming album FREE TIME/DEAD TIME, releasing on Brachliegen Tapes in 2022.

TASOS STAMOU is an electroacoustic music composer and free improvisation performer. His latest works blend his passions for both cutting edge electronics and folklore traditions of his Greek music heritage.
www.tasosstamou.com

Left Hand Cuts off the Right is the moniker of sound artist and musician, Robbie Judkins. His work melds acoustic instruments, bent electronics, synthesizers, field recordings and more."The freshness of Judkins's restrained approach is felt in an enjoyably weird atmospheric balance between sustained calm and sticky anxiety." The Wire ... more

Bandcamp Daily  your guide to the world of Bandcamp